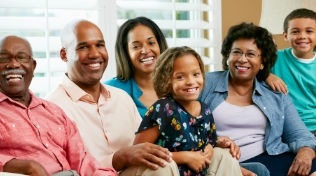 The racial wealth gap is so persistent in American society. According to a Brookings Institution report analyzing the black-white wealth gap sums up, “Black and white households reveal the effects of accumulated inequality and discrimination, as well as differences in power and opportunity that can be traced back to this nation’s inception.”

You can’t point to one period of time, or one single statistic or cultural factor, to explain why the average black American has a tiny fraction of the wealth of his white counterpart. Instead, there’s a broad range of elements at play — from mortgage-lending practices, dating back a century ago to higher car insurance rates for drivers living in black neighborhoods today — that have compounded over the decades and collectively result in a system that’s unfair, if not overtly racist.

No single data point can explain all the ways African Americans are held back economically. With that in mind, we compiled numbers that show dramatic racial disparities in everything from retirement savings to business ownership.

Together, the data reveal a pattern of injustice that’s also a core part of why protesters have taken to the streets in the wake of the recent killing of George Floyd at the hands of the Minneapolis police.

• Black job applicants who “whitened” their resumes — by removing cues that revealed their race — were significantly more likely to be asked for job interviews, according to a 2016 study co-authored by a Harvard Business School professor.

• Similarly, a National Bureau of Economic Research paper found that job applicants with popular “white” names like Greg and Emily were 50% more likely to get callbacks from employers than people with “black” names like Lakisha and Jamal.

• In a study published in American Sociological Review from 2009, different people with similar qualifications applied for entry-level jobs in New York City. “Black applicants were half as likely as equally qualified whites to receive a callback or job offer,” researchers found.

• Going back at least to 1972, regardless of whether the economy has been thriving or struggling, the black unemployment rate has generally been roughly twice as high as the white unemployment rate, the Economic Policy Institute found.

As the nation began opening up in the wake of the 2020 coronavirus pandemic, white workers have recovered more quickly: The seasonally adjusted white unemployment rate dropped from 14.2% in April to 12.4% in May, whereas the black unemployment rate rose slightly, from 16.7% to 16.8%, according to the Bureau of Labor Statistics.

• Whereas business ownership rates are roughly 15% among white families, “black and Hispanic families are about half as likely to own a business,” a Federal Reserve study reported. What’s more, according to a National Bureau of Economic Research paper from June 2020, there was a staggering 41% drop in the number of African-American-owned businesses from February to April.

• “Business ownership is a route to wealth creation,” an Aspen Institute study explained, and while white Americans hold one-third of their wealth in business and financial assets, the median for African-Americans is 15%.

• In the mid-1960s, African-Americans represented less than 1% of all executive-level officials and manager positions at U.S. companies, according to the Equal Opportunity Commission. Their representation increased over the decades, reaching close to 7% in 2008, but it has fallen in the years since then. And it has never come close to equaling African-American representation in the overall U.S. population, 13.4%.

• Of the 614 billionaires in the U.S., only five are black. And whereas many billionaires came to their wealth through inheritance, all five of the African-American billionaires in 2020 are self-made: Jay-Z, Michael Jordan, Oprah Winfrey, founder of World Wide Technology David Steward, and founder and chairman of Vista Equity Partners Robert F. Smith.

• Brookings Institution data shows that black college graduates owe $23,400 in loans when they finish their degrees, versus $16,000 for their white peers. Four years after finishing college, black grads owe an average of nearly $53,000 — largely due to interest accrual and borrowing for grad school — which is roughly twice as much as white grads who finished college in the same year.

• Black college graduates default on their student loans at a rate five times higher than their white counterparts, according to another Brookings report. In fact, 12 years after college, black grads are more likely to default than white people who dropped out of school before graduating.

• Over the course of a lifetime the average worker of all races with a college degree will earn $2.7 million, according to a Georgetown University study. But African-American college grads will earn 20% less than their white counterparts with college degrees.

• African-Americans are far more likely to be “unbanked” — that is, having no traditional bank or checking account — compared to other races. Whereas the white population has an unbanked rate of 3.3%, according to a Federal Reserve Bank of Kansas City study, the rate for African-Americans is 18.2%.

• As of 2017, 36% of African-Americans said they had money in the stock market (including a 401(k) or other retirement accounts), compared to 60% of white Americans, according to a Gallup poll.

• Federal Housing Administration policies essentially instituted segregation for decades. “If a neighborhood is to retain stability it is necessary that properties shall continue to be occupied by the same social and racial classes,” the FHA’s “Underwriting Manual,” published in 1936, stated. “A change in social or racial occupancy generally leads to instability and a reduction in values.” The takeaway is that the FHA would not insure loans to black Americans attempting to buy homes in primarily white neighborhoods.

• Homeownership rates have for African Americans have leveled off, and sometimes even dropped, since the 1990s. Census data shows that the homeownership rate from 2016 to early 2020 ranged from 41% to 44% for black Americans, compared to a range of 71% to 74% for non-Hispanic white Americans.

• An ACLU study shows that black homeowners suffered more greatly during the housing bust. Whereas white homeowners saw their home equity drop 9.1% from 2007 to 2009, and another 2.2% from 2009 to 2011, black homeowners’ equity decreased 11.9% and 5.6%, respectively. “This difference likely emerges as a result of blacks’ disproportionate exposure to predatory loans and other deceptive mortgage schemes,” the study’s authors wrote.

• The Federal Reserve says that 73% of black families own at least one car, compared to 90% of white families in America.

• Black car buyers face higher costs at the dealership. A 2018 National Fair Housing Alliance study found that 62.5% of better-qualified non-white car testers were offered more costly financing options, and the difference would have mean they’d pay over $2,600 more than their white counterparts over the life of the auto loan.

Race, Income, Net Worth, and the Wealth Gap

• The proportion of black families with zero or negative net worth was 37% in 2016, compared to 15.5% for white families.

Despite these statistics, more and more African American families are understanding the importance of financial planning for their families. With each generation comes increased wisdom, knowledge and wealth.

Are you ready to make the necessary changes to improve your financial health? Click on the link below to schedule a consultation:

Gowdy Financial Group, LLC., is a Fee-Only, Virtual Financial Advisory firm dedicated to helping women, from all backgrounds and income levels, get out of debt, save toward your goals and enjoy the freedom that comes with being in control of your money. "Your Goals. Our Solutions." Serving Clients Nationwide. Schedule An Appointment.