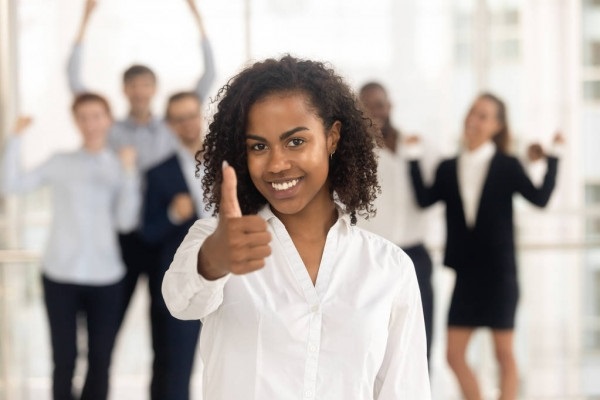 A majority of working Americans believe their financial situation will be better in the future—a surprising level of optimism that signals a disconnect from the state of their present financial insecurity, according to our recent survey.

Fifty-eight percent of adults expressed such optimism, but confidence waned significantly with age. Only 44% of baby boomers think their financial situation will be better in the future, the survey found. Meanwhile, younger (69%), Black (75%) and Hispanic (69%) workers are the most optimistic, despite the fact that 49%, 52% and 49%, respectively, report having two months or less of spending in savings on hand, according to the new survey, conducted in partnership with Funding Our Future, the Bipartisan Policy Center and America Saves.

It’s encouraging that people are optimistic, but if 2020 has shown us anything, it is that we must be prepared for sudden job loss and unexpected medical expenses. More Americans need to increase their emergency savings to fulfill their optimism.

On a positive note, the survey found 29% of households earning more than $100,000 could pay their bills for 12 months or more from savings, even if they lost their jobs.

However, those with lower incomes are particularly vulnerable, the survey found. Forty-three percent of those with household incomes less than $50,000 reported having no money set aside for an emergency. Similarly, when households in this range were asked how they would cover a $400 unexpected expense, only 41% said they would pay it in cash or pay it off on their next credit card statement. The other 59% said they would resort to borrowing, debt or raiding their retirement savings, while 19% said they would be unable to come up with the money.

The economic recovery is allowing many Americans to thrive while others are hurting more than ever. Millions of those who are struggling, are also less likely to have access to a financial advisor to help them.

Given the pandemic’s economic shutdown surpassing a year, 13% of workers said they took out a payday loan to pay bills in 2020. Americans also raided their retirement nest eggs to make ends meet, according to the survey, which found 21% of those with access to a workplace retirement account borrowed or withdrew money. Thirty-five percent of millennials said they sought financial help from family or friends in 2020.

We advocate for workers to have at least $1,500 set aside in an emergency fund to protect them from a financial setback such as an unexpected car or home repair expense. Ideally, we recommend having 9-12 months of expenses set aside in an a money market fund.

The majority of working Americans (66%) reported having some sort of emergency savings, which enabled them to take less harmful actions when faced with financial challenges in 2020.

Advisors should note that emergency savings is among the top three topics working Americans want to discuss with a financial advisor, according to the poll. In fact, 58% are particularly interested in discussing this topic.

And 42% of working Americans explicitly stated they would like the opportunity to have their employer divert a portion of their paycheck to an emergency savings account. Millennials are especially interested (57%), as are Hispanic (53%) and Black (51%) workers, and those who reported having borrowed or withdrawn money from their retirement account last year (61%).

Inertia regarding seeking financial advice is hurting women. More women (39%) than men (31%) say they are in a worse financial situation than this time last year. Women report less financial security than men. In fact, 47% of women feel somewhat or very financially insecure. In addition, 32% said they do not have any money set aside for an emergency, the survey found.

While jump-starting an emergency savings plan can seem to be a daunting task for those just getting started, financial wellness initiatives, including workplace programs to encourage people to automatically set aside a portion of each paycheck toward a savings goal, can help.

Are you ready to make the changes necessary to improve your financial health? Click on the link below to schedule a consultation:

Gowdy Financial Group, LLC., is a Fee-Only, Financial Advisory firm dedicated to helping women, from all backgrounds and income levels, get out of debt, save toward your goals and enjoy the freedom that comes with being in control of your money. We don't sell products; we provide solutions. "Your Goals. Our Solutions." Serving Clients Nationwide. Schedule An Appointment.